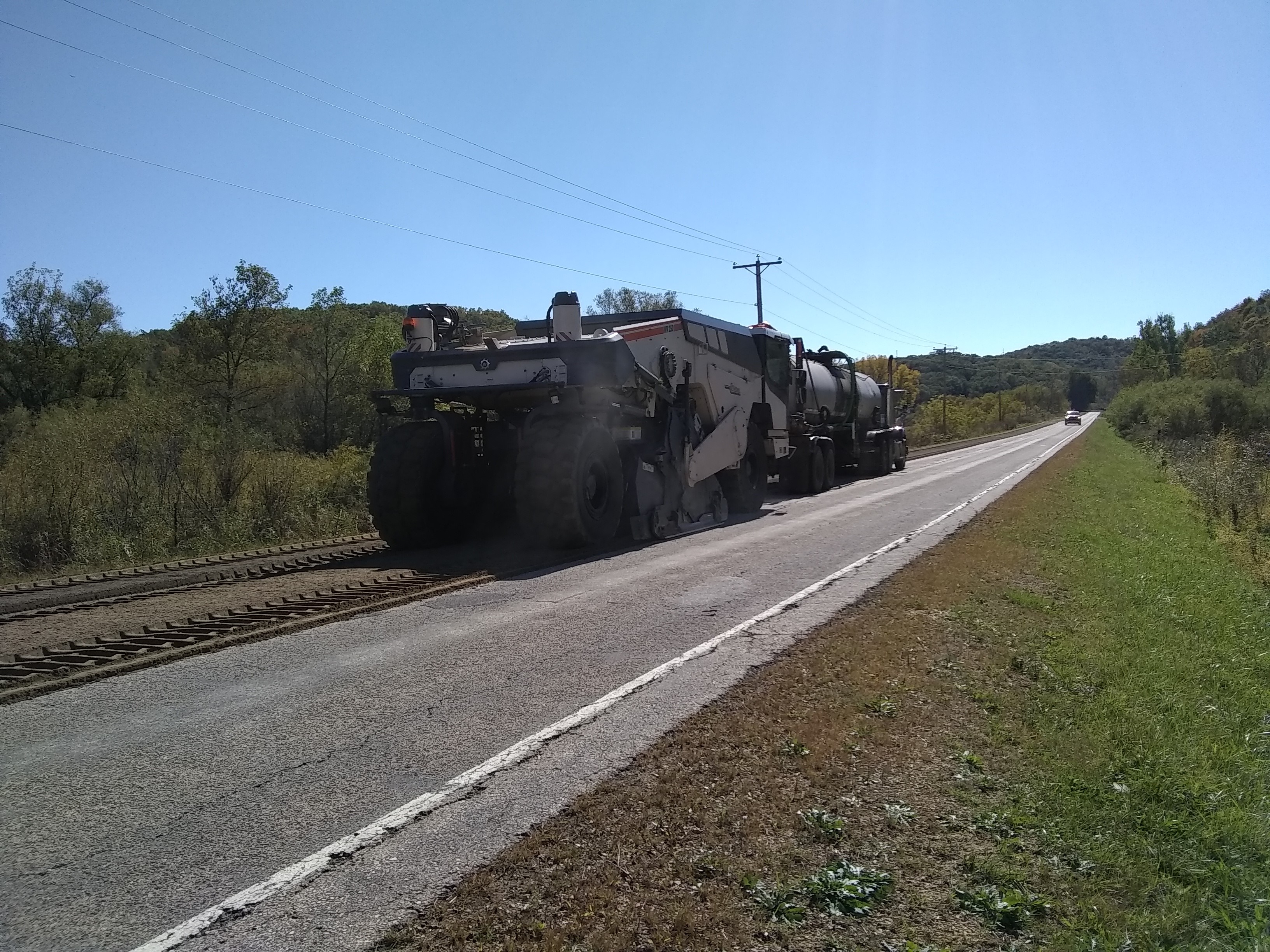 In November of 2014, the Iowa County Board of Supervisors adopted a $20/vehicle registration fee tax in compliance with state statute 341.35 authority.   The decision was based upon a backlog of projects requiring improvement and repairs beyond general maintenance dollars.   Cost share matching funds were available to assist with funding the projects, but the county needed a source of funds for the cost share portion.   Adoption of a vehicle registration fee was estimated to generate $430,000 on an annual basis.   This funding was to be leveraged by the highway department against other state-federal funding to complete improvements to 5 bridge projects on CTH E, HK, G, Y, and HH along with three road projects on CTH E, K, and QQ.   The estimated total costs for those projects was 6.1 million dollars.

In 2015, the first project was undertaken with vehicle registration fee dollars on CTH QQ between STH 39 and STH 39 in Mineral Point township.   This project was an asphalt pulverization and pavement replacement project completed at a cost of $747,000 for just under three miles.  In 2016, the department completed work located on CTH E in Mifflin township a bridge and roadway improvement project and on CTH HK in Moscow township a bridge replacement project.   The costs for the CTH E bridge replacement and 0.3 miles of CTH E approaches in Mifflin were $1.8 million dollars.   The costs for the CTH HK bridge replacement were $585,000.    In total, since adoption of the vehicle registration fee for projects completed in 2015 and 2016; the department has funded $3.132 million in road and bridge improvements.   The vehicle registration fees have accounted for $824,000 (26%) of the funding.   $1.91 million (61%) of state and federal cost share dollars have been utilized.   And, the balance of $400,000 (12.8%) has been funded through annual highway appropriations and the highway fund balance.   For every dollar of vehicle registration fee dollars utilized the department has leveraged another three dollars from other cost share sources to complete the projects.

On October 2nd of 2017, the Iowa County highway department undertook its’ fourth project utilizing vehicle registration fee funds.   Due to the overall costs of the CTH K pavement resurface project between Mounds Park Road and STH 14, the department had initially intended to perform the project over two years in 2016 and 2017.   The south phase of the project from Mounds Park to Knight Hollow road was estimated at $1.2 million.   The north portion to STH 14 was estimated at $575,000.    Due to some additional authorized borrowing by the County Board, the project will be completed wholly in 2017.   The project consists of an asphalt pulverization process, which is pictured above, spot culvert replacements, and placement of a new 4-inch asphalt pavement surface.   The overall project carries a cost of $1.7 million for just under 6 miles of improvements.   Of this $415K will be vehicle registration fee funds, $309K of county supported short-term borrowing, $463K in state Local Road Improvement dollars, and the balance $513k of annual highway appropriations.